On April 19, 2019, the International Laboratory for the Study of Russian and European Intellectual Dialogue together with the master's program "Philosophy and History of Religion" organized a meeting with a research fellow of the Catholic University (Paris)

The report was devoted to analysis of the reaction of the Holy See to historical events happened in Russia in the first half of the 20th century and directly related to the Russian revolution. Thus, the period from 1905 (the First Russian Revolution) to deep political, social and international transformations in the 1930s was covered.
Laura Pettinaroli described the ways the Roman Curia explored "Russian issues", conducted information gathering, made practical decisions; who was the political and religious mediator of the Holy See policy outside the Vatican, and how that policy was adopted. From the point of view of the Roman Catholic Church, the “Russian issues” were both local and global. Local issues were centered around the problems of Catholics in Russia at that time of changes. Global issues were associated with international issues, in particular, with refugee issues.
This study is the result of about ten years of work in various European archives (in France, Italy, Belgium and Russia). In 2015, on that basis there was publishedthe monograph “La politique russe du Saint-Siège (1905-1939)” in the publishing house “Ecole française de Rome”. In the online version of the publication, you can also see more than 70 original documents, photographs and maps, which are stored mainly in the Vatican archives, in particular, in the funds of Pope Pius XI, which were opened to researchers in 2006.

The event was conducted by Arseniy D. Kumankov, academic director of the educational program "Philosophy and History of Religion". 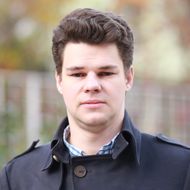