On November 26, 2020, within the framework of the seminar "West and East: Universalism of Culture", a lecture was given by the leading research fellow of the IL for the Study of Russian and European Intellectual Dialogue, Professor at the Pontifical University of John Paul II in Krakow, Teresa Obolevich

American Trappist Thomas Merton (monastic name - father Louis, 1915-1968) is known primarily as a spiritual mentor. It should be emphasized that we are not talking about a specifically Western Christian spirituality (although he belonged to one of the strictest Catholic orders), but about spirituality in the deepest dimension of the Catholic, that is, in the original sense of the word – a universal Church that goes beyond the geographical boundaries or the framework of individual cultural traditions formed throughout the history of Christianity. Long before the Second Vatican Council, Merton had a fruitful Ecumenical and interreligious dialogue with representatives of various Christian denominations and Eastern religions. One of the most important factors that had a significant impact on his work was the thought of early Christian Greek and Byzantine writers, later developed in Russian philosophy, theology, and fiction. The report examined Merton's contacts with Boris Pasternak, as well as the influence of Russian Orthodox theology, in particular, sophiology, on him. 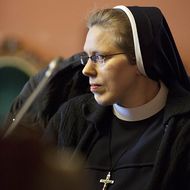